For example on a page we have a button that parses text coming in.

1. Add the following code to Javascript OnLoad event of the table in question

2. Add the following code to any Javascript event where you want to reload the table. Can be ClientAfterevent of any button

As far as I can tell what you name the pageObj in this case tablePage is up to you – at the point of naming you are creating this variable.
My hunch is that you would want to name this something relating to the page and something not overly complicated but unique.

My understanding of the way the code works is.
On loading the page create a pageObj variable named window.tablePage

After pressing the button if there is a pageObj variable named window.tablePage refresh it!

This is useful where you have values in a table row that you wish to pass to a stored procedure.

As per the previous post I was wanting to use this in the context of needing to create a particular view from the data in a particular row.
Its probably possible to do this with some kind of DB::Query or DB::Lookup but in this instance I chose to use dynamic SQL. I will be working on other methods as well.

From my previous post I already had my SQL Azure Stored procedure defined as.

Firstly I went to the list view in PHP Runner and within the designer I inserted a button into the row.
(I will be working on something a bit cleaner later but for now I’m just trying to get it to work)

Where Firstname and DateCreated are field values in my table T0001Persons

So in Javascript I am passing the field values to parameters called Firstname and Dcreate and then in PHP I pass those variables to the stored procedure and the database procedure does the rest.

Next I put the following code in the Server event

Looking at the stored procedure syntax in SQL Azure.. you can see that the variables in the stored procedure that I happen to have been called @firstname and @Dcreate although they could have been named anything because PHP is passing the values and not the memory location(variable name) which makes sense because you are passing from a web server to a separate database server and the same memory spaces don’t exist in both.

Which lead me onto investigating how programs and operating systems manage memory space. link

And here are some screenshots of the code in PHPRunner 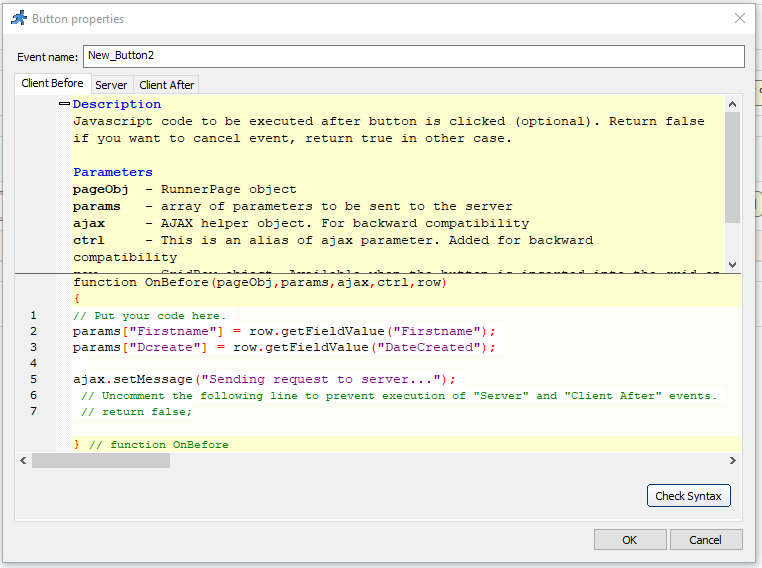 and just for completeness the Javascript Client After Part

and how it looks in the list once deployed

and what happens once I have hit the button.

Of course this is all documented but when there is so much to learn it can take sometime to just look at the documentation and understand it. Most of what I have discovered here is written up
Link

There are situations where you need to create SQL on the fly from a record that you are currently dealing with. This is sometimes referred to as Dynamic SQL. Here I start investigating creating a dynamically created SQL view using a stored procedure. In my case I was doing this so that I could create some particularly valuable values.

and then an example execution is

Using the script as facility in SSMS we can identify the query that has been created by EXEC auditselection 'Mark', '2021-10-03'.

Several things should be noted here

What did work was to have four single quotes with two pluses on either side.

From a discussion on Stackoverflow I also found the option to SET QUOTED_IDENTIFIER switch.

Next up I will be passing parameters to parameterized stored procedure via PHP Runner where the parameters are taken from an onscreen record.

PHPRunner create an event to pass parameters to a stored procedure

This looks promising
Passing one of the field values as a parameter:

and I have discovered that the :1 is considered a placeholder for the following variable and so passing two variables would come in as the following assuming both first and second parameters are text values. If :1 was the target of an integer instead of ‘:1’ we would have :1.

This is php here the single quotes DO NOT escape the string. They will form part of the string that will be executed which is what I want.
The string is not escaped until the double quotes. Confusingly two single quotes look EXACTLY the same as a double quote but they are completely different. If you use your cursor you can see that the double quote is a single character which is interpreted completely differently by the php engine.