I was contemplating a better way of storing our old emails and unhappy with some of the systems in place I started considering whether I could dump them into a database.

Thing is when you export from Outlook some of the standard fields in particular To and From are concatenated. Wouldn’t it be nice to separate those fields into their own table of names and addresses and reference them back to a main table of messages.

This is what I came up with.

For demonstrations purposes I will use two tables

and the child table

and here is the blank second table

Next we create a user defined function

After running this we should 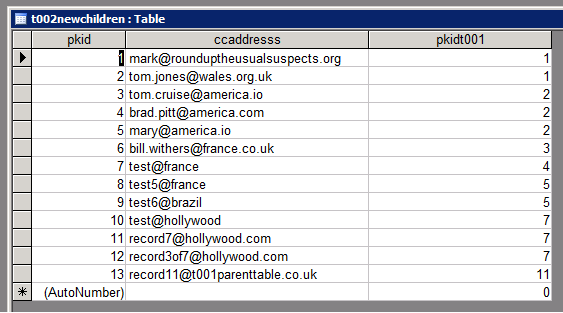 There are a whole host of applications in which you may wish to record the biological or legal relationships between individuals. Here is a short investigation of some of the subtleties related to the options you have to model this data.

Many to many relationship

To a certain extent this looks like a one to many relationship as there appears to be only two tables (albeit one being aliased). This is correct but to record a dependents relationship with both parents two separate records with separate PKIDs need to be input into the persons junction table actually making it a many to many relationship. 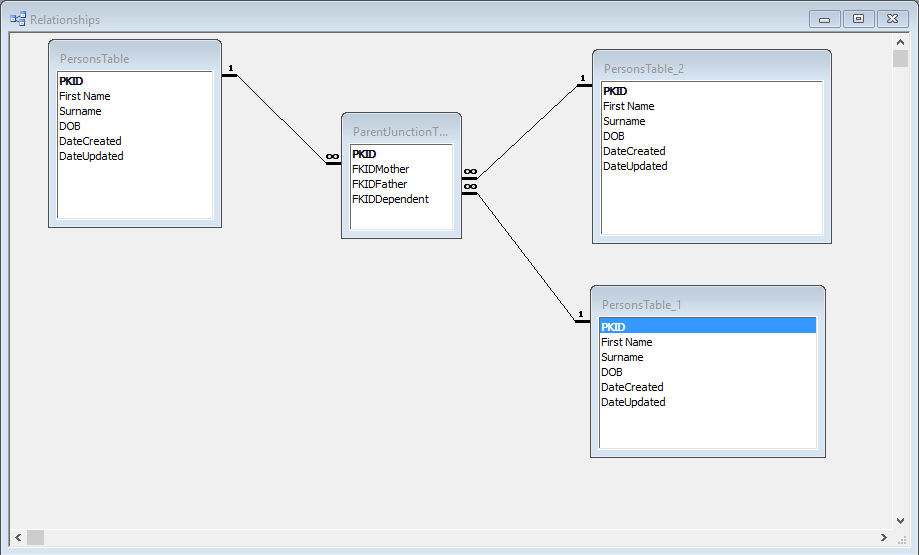 It is not initially clear but a one to many relationship where the many is a finite number (ie not infinite – in our example 2) – can be re-modelled as a one to one relationship as follows. 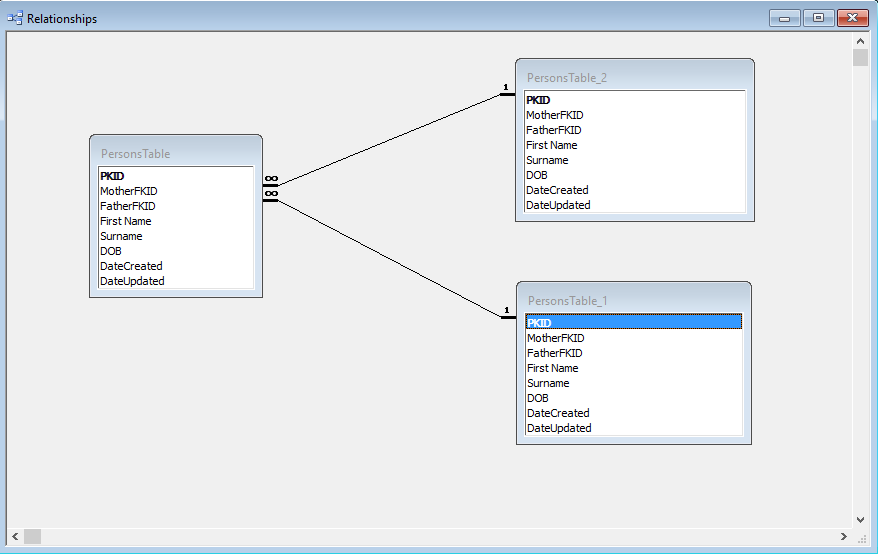 Thus we can separate a table of columns back out into a one to many relationship by pivoting out the column names and making them a value within a field themselves linking them to a field and then adding the ability to add a value. This works because the number of columns is finite. I believe this is the thinking behind a key value database. 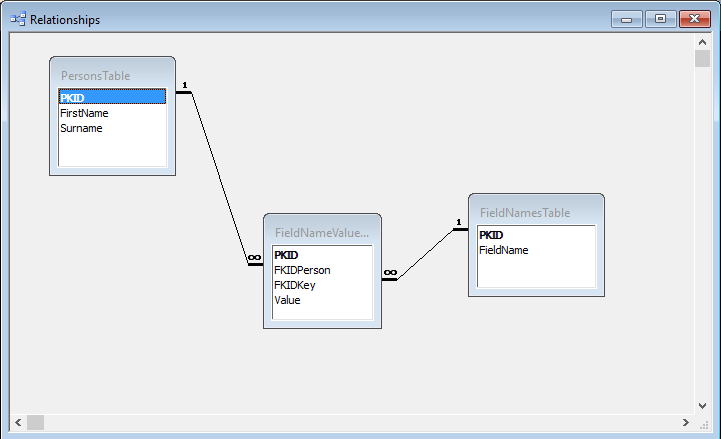 Looking at the tables resulting from data input you would get

What makes this particularly good is that a lot of attributes can be stored against an individual and if you forget a column name you simply add it to the field name table and it becomes an additional option in the KeyValueData table. This can be particularly good if you are not sure of the set of column names that your users may wish to use. It has the disadvantage that validation will become harder as the values are often a mix of value types and cannot be so easily tied back to a particular list as the source of the field will change according to the value of its relative field name. Here for example I could easily add Mother and Father to the table of field names but a user would simply type these in rather than having them validated as per the first three relationship structures.

OK so I didn’t know who he was either until I did a search on simplicity but I wanted to record my best field structure for the storage of addresses which although important is on a par with watching paint dry in terms of excitement. Despite this addresses are central to a heck of a lot of applications so it is important to get it right. This copes with pretty much most addresses. I mainly use locality in larger towns or cities to denote a sub area specifically for users as you can guarantee they will be unfamiliar with the majority of specific street names and particularly for users who are doing business in the same city they are located in it is very useful for them to have a quick understanding of where things are in relation to the assets of the operation involved. Such “context” can be added by using maps but will come for free with intelligent staff if you give them opportunity. I long ago dropped counties and districts but I could see if you were in a larger country such as Russia or America could be useful to note state / oblast etc.. Additionally in the UK town is really postal town – which is often not obvious at all – it can be overkill but you can organise addresses so that postal town is referenced from the town automatically. Probably overkill.