As good as computers are at calculating numbers they are really really bad at doing somethings that humans are just great at like making decisions based on fuzzy logic or translating things between languages. In such situations always go for the human at least until C3P0 comes along. Watson cost $3 million to build, good if you want to play trivial pursuit but ask it to choose between competing software vendors and well you will be nowhere.

That’s you numerical based ranking systems for software purchase!!! 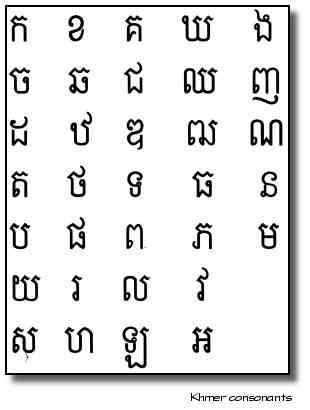 So today it is a bit slow for me so I answered a question from a lad in Phnom Phen in Stack Overflow. He was looking for support for Khmer in MS Access 2013, the official language of Cambodia. He has a database but unfortunately he can’t get records to sort alphabetically for Khmer text. I’m not sure I found a solution I made some suggestions. I’m always really interested in questions like that because a solution for him would be the kind of thing that would be useful to anyone able to write Khmer which is presumably millions. I had a look at the alphabet – wow – computer fonts seem to do a terrible job of displaying it reducing it to the point where at a similar scale to other fonts I need a magnifying glass to distinguish differing letters. I guess you just have to choose larger font sizes but it was tiny at the scales I was seeing examples. It made me wonder how much cultures with difficult or tricky languages are disadvantaged in day to day commerce. Obviously to me their alphabet is only pictures.

But then in reality that is only what all alphabets are.

Never heard of it?

I hadn’t either – it is however a small exe that stands for Code Access Security Policy Tool which enables users and administrators to modify security policy for the client machine to .NET framework.

This tool is automatically installed with .NET frameork.
The following alters privileges of websites to allow them access to the .net framework on the client machine.

The following is the full parameters associated with a .bat file that passes parameters to caspol.exe

This works well for me – some of my first applications only had 2 numeral positions. I now give new projects 3 digits as the more successful applications generally have more than 100 forms and queries and I like to have everything in order. I have yet to come close to more than 200 forms in an application so I feel confident that 999 is satisfactory. Of course its not a major problem if I go over 999 forms it just doesn’t order so nicely in the database window which tweaks my OCD.

All names have no spaces and are in camel case.

I like to have the forms tagged with this incremental Form Prefix – eg F001 or in the picture below F103. When you have lots of forms it is a lot easier to refer to forms by this unique key. Additionally if you are speaking to a user over the phone you can immediately identify the form that they are on that they may wish additional features on or on which they have found bugs.

These pre-fix conventions are only an implementation of the principles of database design. They are effectively primary keys for differing objects. If I was in the access team I would probably hard wire this feature into the IDE so that code referred to the primary key and text descriptions could be changed retrospectively without breaking links and if possible forms would start with the PKID placed on them. (maybe with the feature available to switch this off)

Then you can run at start up by creating a macro that is titled autoexec
And using the Runcode action call the TurnMenuOn() function alternatively you can call it from the form opening.

It is often useful to create a couple of straight Macros that run these functions as well so that when you are in design mode you can quickly run the functions.

Well if it is good enough for Google

One single variable field with filtering only occurring after return has been hit. Search is across complete range of fields and searches for a string within all of the fields. Search string is maintained after search and results shown below. Don’t make the search case sensitive unless there is a good reason for doing so.

Use it – for those things just built for me I have arguable gone a bit mental before.

Conditional formatting is particularly good for dates and allowing people to quickly see what is coming up and what is past. I tend to use the traffic light analogy for this.

Despite the fact that spatially enabled databases have been around pretty much everywhere for quite sometime there’s still a heck a lot of enterprise applications out there that are not using the feature even though their backends support it.

SQL server has had the facility since 2008 , Oracle has it as well although it is with the expensive Oracle 11g Enterprise edition.

So if its available why are so many applications not using it?

Well one of the reasons is that many of the applications which would benefit from introduction are central to organisations and were in existence long before the feature was available in backend databases. So why not introduce it as an update? Well the problem is a geospatial attribute is a form of primary key more accurate than the often completely arbitrary primary keys that most tables will take as their reference. Adding it is likely to require not just the addition of a geospatial attribute which will be a defacto primary but potentially adding a full table not as a child but as a parent to the previous parent records – the former parent records requiring the addition of foreign keys that relate to their parents.

As most of you know altering primary keys in tables is pretty much equivalent to transplant surgery for a database.
Totally wiping a primary key and starting with a different primary key that needs to then be captured for itself and related back to its children is if anything several orders of magnitude worse than that..

Doesn’t sound good does it.

This is another case where if you have paying clients or you have a purchased product that isn’t going to happen until there is an outside force from a competitor. But the benefits are legion. As it stands most information in geographical systems is flat files that has to be updated directly within either the web gis or a gis desktop. These programs are really terrible making an application fully geospatial by design allows the UI you to display the geographical information in the GIS – web or desktop and related information in forms which often have vastly improved searching / linking to other systems drop down boxes well pretty much everything.

Leave plenty of time for it but would be proper automation. Too many GIS systems are mirrored copies of a database that periodically have to be updated. This is not the long term optimum.