Hence another reason to empower users.

How do you truly asses the cost of a job – if you are in private business it tends to be everything that you do to undertake the work. How long it is going to take you to get to the location to do the work , how much it will cost you to get to that location. In some large businesses things like time to get to a location to fix the item tends to be totally overlooked – this can be a not insignificant amount of time even if there is no revenue cost. I don’t care who you are I’m of the opinion you want to be reducing wasted time as much as possible.

The other day I was dealing with dates and I found a cracking little gotcha that might just be catching a few people out.

I’ve been dealing with legal dates and I needed to set dates some 25 years in the future for payments of moneys. That’s fine just typing in dates I’ve been putting dates in which turn out to be a century in the past. This led me to investigate.

Within windows we get very used to typing in dates by using 6 digits – 01/01/14 or 09/05/15 – most users computers would recognise these dates as 1st of January 2014 and 9th September 2015. What many users may not consider , myself included , is that the interpretation of the year in this scenario is relative. That is relative to a century. We happen to be in the 21st century but if you type in 99 most computers will interpret the year as 1999 and not 2099. Fine but at what time does it change the century. Well turns out there is a configuration setting.

Here’s how you get to the configuration settings in Win 8.1

Should get you to the following; 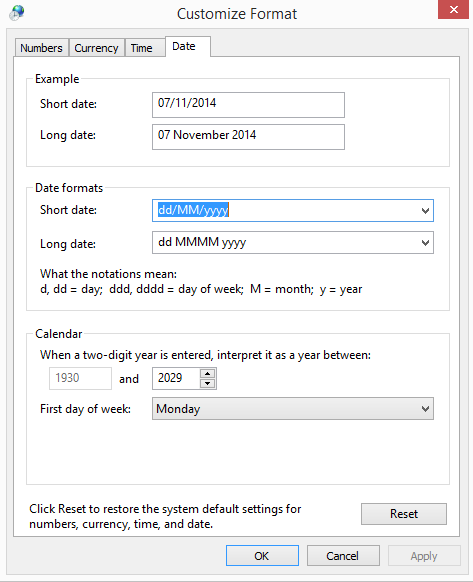 The danger is of course that users will type in 07/11/30 thinking this will be 2030 when the two digit interpretation configuration will interpret it as 7 November 1930. How it interprets this comes down to the above setting. I believe at present this is the default setting.

Its one to watch out for and doubtless it may be catching some organisations out.

Recently I was listening to a Channel 9 Microsoft podcast talking about how their products could be used in developer operator environments. Interestingly the podcast talked about Developer Operations being a subdivision of the central IT department and how once an application was up and running the developer would never hand over support to a separate team to maintain the code. Regards this definition I would go further and suggest that organisations should encourage super users aka citizen programmers to develop processes and applications themselves. A mid-way strategy might be to station professional developers with the applications within the sections for whom they do the work and responsible to the divisional head and NOT the IT section. I suggest the benefits of this approach are as follows;

Geographical location – Not all users work in offices where you have access to 47 inch screens with instant Skype, team viewer access and 24/7 high bandwidth internet access. Those supporting an application sometimes end up talking to Betty the cleaner who is on a landline 20 metres from the computer with the issues, the only reason you are speaking to her is because she just happened to pick up the phone, on further questioning she does have an e-mail account but hasn’t used it for a couple of weeks, she politely tells you everyone else has gone home but is sure if you phone back on Monday someone will help out. You think damn if I could just sit at the machine and see what’s actually going on. Also describing what can be UI graphical issues in text or speech is incredibly inefficient 95% of the useful information is often lost in translation. It can be impossible to articulate or describe UI problems except by demonstration. A Developer operator that is local doesn’t have to rely on understanding the problem second hand their first experience of the problem is often first hand even if it’s not they often immediately familiarise themselves with it first hand. What’s better than having an excellent logging system for tracking problems? Yes you bet, not needing one in the first instance.

Aligning your staff with Corporate Objectives – there is a reason rental houses tend to be more run down than privately owned properties. If something goes wrong it its not going to be the occupiers cost to fix it – its not my job to make it work well. This is rarely the case with people who build and operate their own systems their motivation quickly aligns with the organisations objectives – if they can make it work better by predicting problems and fixing them before they arise, their life is made easier so, they tend to get in gear.

Motivation – if they can make it work better by predicting problems and fixing them before they arise their life is made easier, that is a powerful motivator to get things right and to predict problems before they arise. The people who fight for systems are usually the users. I’ve come across a lot of IT support where they get it to an “acceptable” level which usually means it gets a completion tick often the minimum is done to get the thing working. I was once on a project and was trying to get an icon working for the web application. I got the icon from the central team but wasn’t very happy with the look of it as I thought it looked bad. I asked the project manager he agreed it looked crap but his closing comment was “who cares it was authorised”

Education – Hey guess what you learn things about your work if you know how your tools work. You start making connections that feed back to improved practices. There’s an actual name for this Constructionism proposed by among others Seymour Papert – actually the ideas been around for about as long as people have been able to think.

A quote attributed to Aristotle ;

“For the things we have to learn before we can do them, we learn by doing them”

I believe people to be naturally intelligent with the ability to pick things up – especially if they are immersed in the problem – case in point learning a language. Everyone learns it by immersion and because they have to. I don’t like the implication that because most people aren’t going to be the next Einstein they can’t be taught things I have yet to come across a colleague, myself included who hasn’t been more useful because they know more rather than less.

Reaction Time – for insurance purposes people are duty bound to mitigate damage. Now they do better job at this if they are actually on site when things happen. Central developers often have very little visibility on some of their projects and it may be days before they hear about something. Often the time to reaction can be critical in reducing damage. A water leak spotted in five minutes is fixable – left for a day and its a disaster. Granted the majority of applications aren’t that important however the same principle still applies.

An on hand developer operator doesn’t preclude additional support whereas central support requires it – they do the easy stuff they call for help for the difficult stuff. Additionally they are reliable contact for accurate description and dissemination of important information. This can be very useful. It is easy to get outside help in when things are needed it is not easy to suddenly train up local staff to accurately describe a difficult problem.

Prioritisation of Work Load – Local users are far better at judging importance. The importance of a job may not relate to its difficulty or complexity. This makes it a requirement to understand the domain when deciding on what problems need to be solved first. Here’s an example – a company is going to close on a deal if they can print out and deliver a tender document. The users were a bit rushed and left it to the last minute. IT support know roughly what is going on but aren’t completely ear to the ground on tendering so the main printer support guy is off on holiday. Besides he thinks in the normal course of events a dropped printer is not an emergency. Extreme example but this kind of reward / problem ranking happens all the time. Ok computer support systems allow you to rank problems – that kind of fuzzy logic is exactly the kind of things that never really works out well and usually doesn’t allow for altering of priorities after submission. This can lead to businesses adopting the everything is important or nothing is important default setting. The first has people shouting at each other for totally unimportant tasks while the latter leads to speed of a sloth.

Security is a phony excuse – you have no defense other than vigilance against a sustained attack from an internal person who is talented. Setting ridiculous security levels on everything to protect against a few valuable parts is totally counter productive. The de-motivation of staff and subsequent inefficiency of process is a far greater danger to the viability of your business than fraud is likely to be. Resulting reduced levels of visibility which ironically can increase the opportunity for fraud and likelihood of major errors.