There are no shortages of articles on how to take a backup of a MySQL or MariaDB database from cPanel however given how important it is I like to write these things down showing how I accomplished this for my own reference. Its extremely easy to do a download which means that you should not have any opportunity or reason not to do it regularly if you have an important database that for instance is part of a web application.

1. Enter your given cPanel management portal. 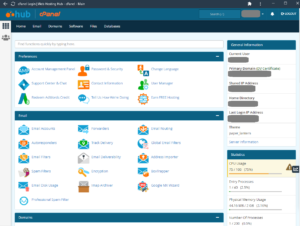 2.Find the database section and select the phpMyAdmin icon.

3.Select the database you are interested in from the lefthandside.

4.Click export in the menu section and then its just a case of clicking go. An SQL will be downloaded to the download directory (on a windows machine). And keep this and you can run this to create a new database.

And its very easy to go in and check if its ok you can use any good ide or you could change the suffix to TXT and then just look at it in word.
Happy backing up.!!!

Within an instance to identify the default character sets and collation in all databases.

To alter the default character sets and collations for a database in a MySQL or MaraiDB instance.

There are unconfirmed reposts that queries against TEXT fields are generally 3 times slower than against VARCHAR fields.

Values in VARCHAR columns are variable-length strings. The length can be specified as a value from 0 to 255 before MySQL 5.0.3, and 0 to 65,535 in 5.0.3 and later versions. The effective maximum length of a VARCHAR in MySQL 5.0.3 and later is subject to the maximum row size (65,535 bytes, which is shared among all columns) and the character set used.

And if you want to change the engine on a table retrospectively. See OPERATIONS.

And a short note on your choice of collation

Actually, you probably want to use utf8_unicode_ci or utf8_general_ci.

utf8_general_ci sorts by stripping away all accents and sorting as if it were ASCII
utf8_unicode_ci uses the Unicode sort order, so it sorts correctly in more languages
However, if you are only using this to store English text, these shouldn’t differ.

“MySQL will not distinguish between some characters in select statements, if the utf8_general_ci collation is used. This can lead to very nasty bugs – especially for example, where usernames are involved. Depending on the implementation that uses the database tables, this problem could allow malicious users to create a username matching an administrator account.

This problem exposes itself at the very least in early 5.x versions – I’m not sure if this behaviour as changed later.”

And here is some code that allowed me to reset the auto increment index on a table.

I have tested it and works with INNODB and MySQL

It is an incredible feature of MS Access that it is so easy to connect to different databases and use as a Management Studio. Having a unified platform across all the different backends is very very useful. Setting up those connections is not always straight forward and as ever involves configuration – something which often evades all but the most accurate of intelligent guesswork. This is set out for MS Access 2003 but I would expect this to work on all versions of MS Access.

Use the architect version of the MySQL driver that relates to the version of MS Access that you are using. In this case MS Access 03 is 2003 so I used this.

Install as per normal driver. 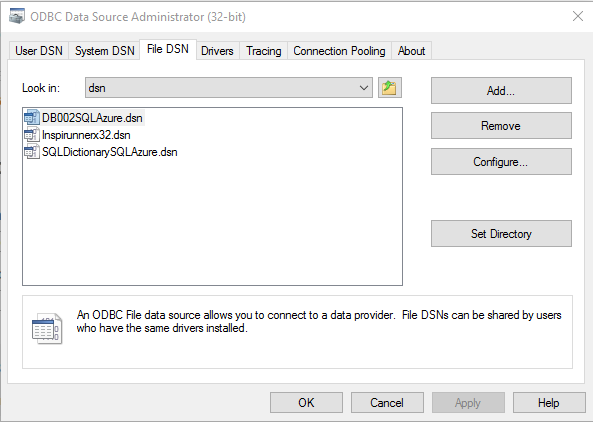 You will be presented with a Create New Data Source window – navigate down to the MySQL and here choose unicode – ANSI and Unicode are two character encodings that were historically in wide use. Ansi is very old and is used by older operating systems like Windows 98. Unicode is newer which has a vast character set and is used by Office 2003 and upwards. UTF-8 is even newer. 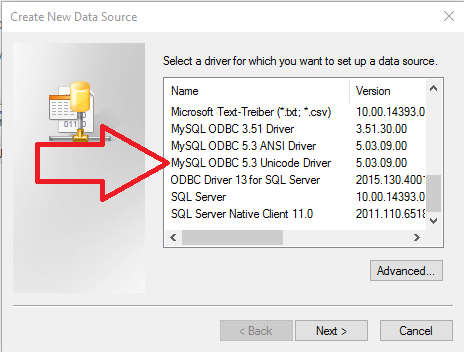 Select then hit the next button.

You will be presented with a Create New Data Source dialog in which you can hit the Browse button and create the name of your file dsn. Here I have already created three – 2 are SQL Azure dsns and the third is a link to my inspirunner database. A hosted account.

You should then be shown the MySQL Connector / ODBC

You absolutely must know the name of your server – the port it is listening on and the user password – once these are filled in selecting the downard arrow should allow you to select the database. 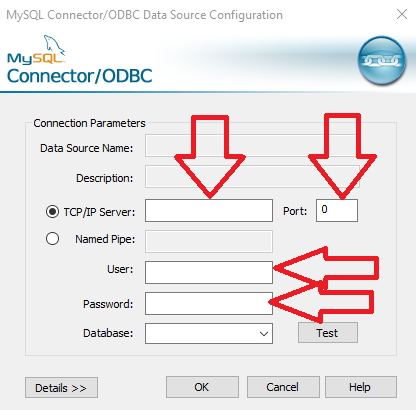 Hit test and you should see success and then hit OK.